Here’s a quick perspective on five local stories that have made news in the past week.

Local cities rack up hefty surpluses — A Post analysis of annual financial reports of eight mid-Peninsula cities shows they accumulated surpluses ranging from $7.2 million in Los Altos to $103 million in Mountain View. The money has been rolling in because of property tax revenue increases and one-time developer fees. 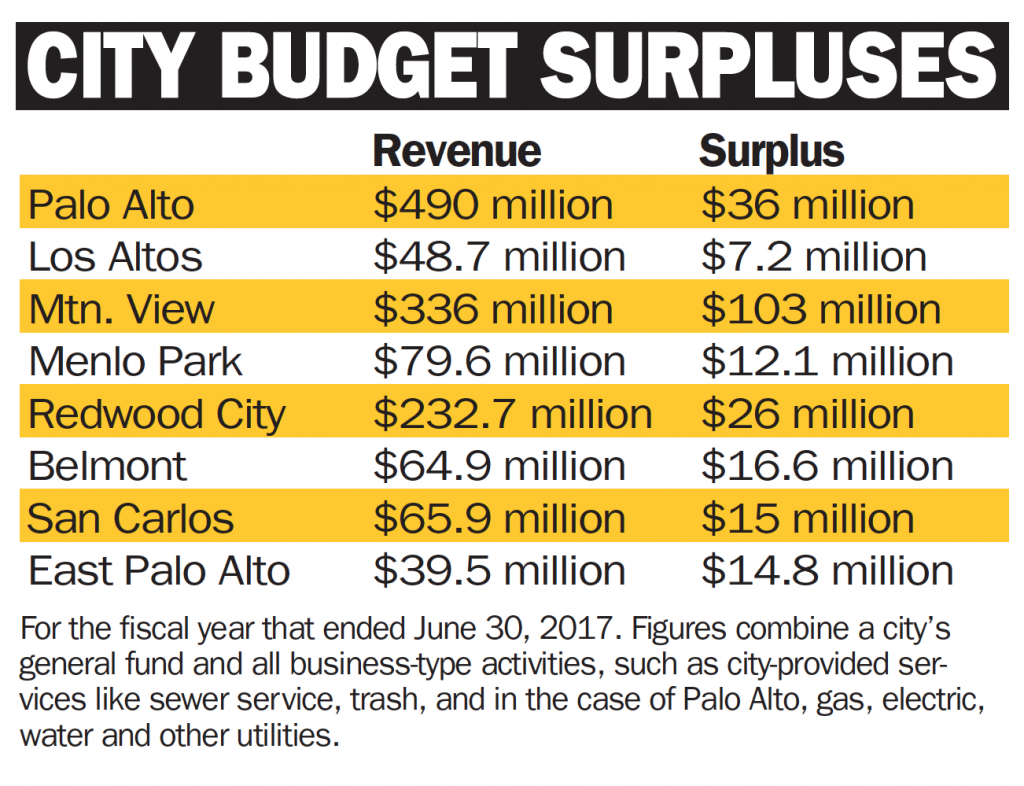 If these cities were smart, they’d put the money in reserve to pay off their growing pension and retiree health care liabilities.

An exception would be East Palo Alto, with a $14.8 million surplus. A startling 1,150 of the 2,800 children in the city’s Ravenswood school district are homeless — they’re sharing homes with other families, or they’re living in RVs or makeshift shelters. With that kind of crisis, the city shouldn’t be sitting on this money.

I know there’s a reluctance amongst city officials to put money in the Ravenswood district, given its reputation for not spending money wisely. But maybe the city can act independently of the school district to help these kids and their families.

Palo Alto High School removes a mural made by James Franco — I don’t think this is a big deal for the students one way or another, but the district doesn’t want to be associated with this guy who has been accused of inappropriate or sexually exploitative behavior by five women in Hollywood.

It reminds me of the controversy earlier this year when the district decided to rename Terman and Jordan middle schools because their namesakes were involved in the eugenics movement a century ago. Funny, though, how a painting Franco donated has been left up in the Media Arts Center of the school. Interim Superintendent Karen Hendricks said in a statement that the painting will be “transitioned,” her euphemism for “removed.”

It’s also funny how Principal Kim Diorio, who was caught up in the controversy about allowing a convicted sex offender student to return to campus, wouldn’t return our phone calls about the removal of the Franco art. Sexual misconduct must be a very touchy subject for Palo Alto school administrators these days.

Major, five-block development proposed on El Camino in Redwood City — This development at 1601 El Camino Real will replace the Acura and Ford dealerships and will stretch all the way back to the railroad tracks.

Cities ought to look at major projects like this and ask, “Does it make the housing-jobs imbalance better or worse?” Rents are soaring and people are moving away because we don’t have enough homes.

The project includes 272 apartments with some that would have below-market rents. OK, but the development also includes some 589,700 square feet of offices. Assuming 1 employee for every 200 square feet, this development will result in 2,948 jobs. And assuming that each apartment houses two people, the ratio of jobs to people in homes for this project would be 2,948 to 544. City Council ought to insist that this project include more homes to balance out the equation.

Depot Cafe to close Feb. 18 — This is a charming, mom-and-pop eatery located inside the San Carlos Caltrain station. A great place to get a breakfast of eggs or pancakes and a cup of hot coffee. It’s reminiscent of the roadside diners you use to see in the 1950s and 60s across the country.

The landlord, SamTrans, is building a mega office and housing development on the west side of the tracks along El Camino, and the construction area has squeezed out the parking for the cafe, killing this beloved business that’s been going for 34 years. It’s unfortunate that SamTrans couldn’t set aside some parking for the cafe near its entrance during construction. Yes, SamTrans did provide some parking spaces, but they were too far away for customers, some of whom are disabled.

The closure of this family-run business is just another sign that things are changing around here, but maybe not for the better.

20th anniversary of the big flood — The 1998 flood struck in the middle of the night, when a high tide, days of rain and a swelling San Francisquito Creek combined to inundate thousands of homes in Palo Alto, Menlo Park and East Palo Alto. The question now, 20 years later, is what have we done as a community to prevent this from happening again?

Looking at the timeline the Post put together on the 20 years since, it seems like the first decade was spent spinning our wheels. In 1999, for example, a group of residents led by attorney John Hanna sued to get the cities of Menlo Park and Palo Alto to remove the Pope-Chaucer Street Bridge, which got clogged with debris during the storm and caused water to back up and flow over the creek’s banks. The cities of Palo Alto and Menlo Park settled the suit by paying the plaintiffs a combined $3.5 million — money they didn’t want. They wanted the bridge fixed or removed, which the cities refused to do.

That was the perfect example of how we wasted the first 10 years after the flood. We’ve also learned that it is time consuming and frustrating to get federal and state permits to build levees, reconstruct bridges and widen the creek channel.

Now we have an effective agency behind the fight, the San Francisco Creek Joint Powers Authority, and an executive director, Len Materman, who seems adept at navigating the bureaucratic and legal quagmire that hinders effective flood abatement. We’re finally starting to see things get done, like the rebuilding of the Highway 101 bridge above the creek and the installation of taller flood walls. And more is on the way.

Franco comes out of hiding, sort of

Palo Alto native James Franco attended last night’s SAG Awards, but viewers might not have seen him. After being accused of sexual misconduct, the “Disaster Artist” star appeared to skip […]

Resident sues over Pope-Chaucer Bridge plan, saying it was a done deal before public saw it

BY EMILY MIBACH Daily Post Staff Writer A Menlo Park man is suing the government agency tasked with reducing the possibility of flooding along the San Francisquito Creek, saying that […]

BY EMILY MIBACH Daily Post Staff Writer Redwood City Planning Commissioners are worried a massive six-city block development will worsen the housing-jobs imbalance, and they want to see some alternative […]