Palo Alto police, in a crackdown on speeders and other traffic scofflaws, wrote 40% more traffic tickets in 2018 than the previous year, a new report shows.

In 2018, police issued 8,011 tickets, most for speeding, lack of registration or missing tabs and using a cellphone while driving, according to the city’s database of traffic tickets written during 2018. 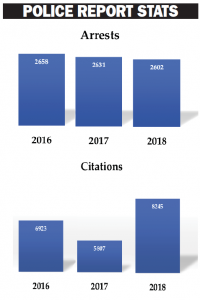 Many of those tickets were issued along Alma Street, El Camino Real, E. Charleston Road, San Antonio Road, Middlefield Road and Embarcadero Road, according to the database.

In 2017, the city issued 5,708 tickets. The tickets were for similar sorts of violations — cellphone usage while driving, lack of registration or missing tabs and speeding.

Chief Bob Jonsen brought back the city’s traffic patrol in July, staffing it with two officers. Palo Alto police did not have traffic cops for three years, though officers on regular patrol would stop people for traffic violations.

Jonsen told the Post in April 2018 that the visibility of traffic enforcement officers on motorcycles can discourage speeding and other traffic violating and reduces property crime.

“When people see there’s people out there getting cited for whatever it is … they start to drive a little more cautiously,” Jonsen said at the time.

Traffic citations were the bulk of tickets handed out in 2018, a total of 8,245, according to the city’s annual police report.

The Post asked police spokeswoman Janine De la Vega for more information about the 11 use of force incidents, such as when they occurred and what sort of “force” the police used.

However, De la Vega forwarded the Post’s inquiry to the department’s custodian of records and said the department considered the questions a California Public Records Act request. That gives the city 10 days to respond.

OPINION BY DAVE PRICE Daily Post Editor This doesn’t make sense. A few months ago, the Palo Alto city budget was so tight that the Fire Department was forced to […]

BY ALLISON LEVITSKY Daily Post Staff Writer A Palo Alto man was almost extorted out of $300 after he sent a racy video to a stranger he met on Facebook, […]