A state appeals court on Friday ruled that District Attorney Jeff Rosen and his office should be disqualified from prosecuting one of the defendants charged in a scheme alleging Sheriff Laurie Smith’s associates exchanged gun permits for campaign donations.

Sixth District Court of Appeals Associate Justice Adrienne Grover said that if the prosecution of Christopher Schumb is to continue, it should be handled by the state Attorney General’s office.

Schumb, a San Jose attorney, has a history of fundraising for elected officials and in this case accepted donations from those seeking gun permits in his capacity as a treasurer of an independent expenditure committee supporting Sheriff Smith’s re-election in 2018.

Schumb argued that his friendship with both Rosen and Rosen’s chief assistant, Jay Boyarsky, created a conflict of interest, making it unlikely Schumb would receive a fair trial.

Rosen said in a declaration that after he was elected district attorney in 2010, Schumb “became a political supporter, helped raise money for my subsequent re-election campaigns, and gave me political advice.”

Schumb asked the appeals court if jurors might think Rosen decided to prosecute him so that it wouldn’t look like then D.A. was playing favorites and shielding a friend.

Schumb also pointed out that Rosen’s own office policy prohibited prosecutors in his office from handling the case of a friend or relative.

A trial court judge, Eric Geffon, threw out Schumb’s request to disqualify Rosen in September 2020. But Schumb appealed, and on Friday the appeals court came down on Schumb’s side.

In court documents, Schumb’s lawyer said the case all about tit-for-tat: that Rosen decided to investigate Sheriff Smith in retaliation for her refusal to let the DA secretly wiretap inmates in her jail. She said he needed a warrant. Rosen claimed he had been investigating Smith long before her decision to deny his wiretaps.

Schumb said in a declaration that Boyarsky had sought his help to mediate the dispute between Rosen and Smith.

Rosen was unsuccessful in obtaining access to the phone calls. Then the D.A. had his investigators raid Smith’s offices.

Smith, who was first elected in 1998 and is in her sixth term, had been accused of selling such permits by opponents in previous re-election campaigns, but this was the first time a district attorney decided to bring charges.

Schumb is charged with bribery and conspiracy to commit bribery.

Jensen also asked the appeals court to disqualify Rosen in his case, but that was denied on Friday.

The former CEO of AS Solution Inc., Christian West, pleaded guilty on Aug. 31, 2020, to charges that he offered $90,000 to Smith’s re-election campaign in exchange for CCW permits.

West’s charges will be reduced to misdemeanors if he testifies for the D.A., which is expected.

Two other former employees of AS Solution, Martin Nielsen and Jack Stromgren, pleaded guilty on Oct. 19, 2020, to misdemeanor charges in the case and will testify against the other defendants. 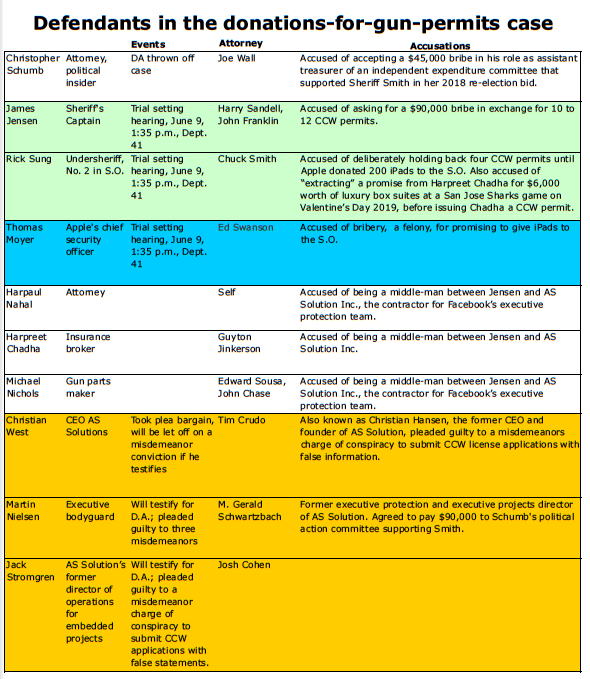 DA Rosen will face an opponent next year

By the Daily Post staff Sajid Khan, a public defender who says he’s “committed to truth-telling about systemic racism,” announced Sunday (July 11) that he will challenge District Attorney Jeff […]

Judge Aaron Persky should be fired