Football and the other sports played in the fall by high school students will be delayed until December or January because of the coronavirus pandemic, the California Interscholastic Federation announced this morning.

Each of the 10 sections will release their own schedules built around the CIF calendar released today.

High school football practice was to begin Aug. 3 followed by the first game on Aug. 21.

In Palo Alto, Superintendent Don Austin said all athletic conditioning for fall sports will end today (July 21). Students were previously able to meet in small groups to train for some sports like swimming. Austin said the state announcement was disappointing but not unexpected. He said more clarification is needed about whether practices will be allowed even though it is clear games are canceled this fall.

The CIF’s announcement came out three days after Gov. Gavin Newsom ordered most public and private schools to begin the school year with distance learning rather than having students in the classroom. Newsom had previously said he was leaving the decision about how to open schools up to local school boards.

Principals and athletic directors are expected to meet with their coaches this week to devise a plan. 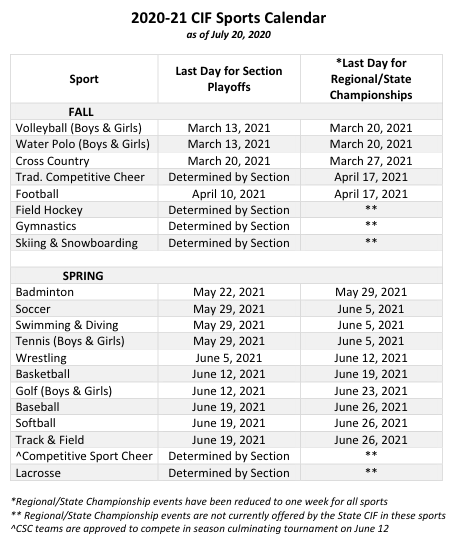 By the Daily Post staff Santa Clara County officials announced tonight that they plan to offer thousands of vaccination appointments this week and next weekend because of increased supply. Anyone […]

Sheriff’s employees with COVID-19 worked in the jails

By the Daily Post staff The two San Mateo County Sheriff’s employees who have tested positive for COVID-19 worked at the county’s jails, according to spokeswoman Lt. Stephanie Josephson. The […]

By the Daily Post staff Tests on sewage in Palo Alto and Santa Clara County show Covid infections spiked last week and are now dropping. The test results are in […]