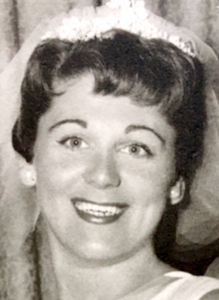 Betsy was born and raised in the Midwest and came from humble beginnings, being the daughter of a housewife and an interior house painter, both of whom were immigrants. Her kind and nurturing nature was evident even in childhood, with her selflessly looking after her siblings, helping them with their studies and steering them clear of harm’s way. She excelled in school, particularly in mathematics, and attended Northwestern University until she left to help out her family financially.

In 1955, Betsy moved to Los Angeles, where she met her husband of 62 years via the City of Hope, for which she worked. She became a loving and devoted wife and mother, opting to forgo a career to raise her three sons. In 1968, she and her family relocated to the San Francisco Bay Area.

Only after her youngest son had graduated from high school did she return to work, embarking on a twelve-year career with the Palo Alto Unified School District as a secretary to its psychologists. In addition to being caring, cheerful, outgoing, altruistic, hardworking, smart, and resourceful, Betsy was extremely resilient, a true fighter, surviving a near-fatal automobile accident that killed the party-at-fault and ended her career. Though she had every right to be bitter, she refused to let the accident get the better of her, living the rest of her life to the fullest, despite injury and chronic pain that became debilitating in her final years.

Betsy enjoyed playing bridge, reading, swimming, taking strolls, attending plays and movies, dining out, socializing with friends, and volunteering for worthy causes. She adored her grandchildren and cherished spending time with them.

Betsy is survived by her husband, three sons, and four grandchildren.

In light of the pandemic, a small, private service was held, with Betsy laid to rest at Hills of Eternity Memorial Park in Colma, CA.