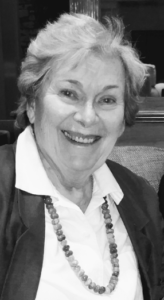 Long-time Palo Alto resident Mary Ann “Mimi” Webb passed away March 2 from natural causes at the age of 88. She will be remembered and missed by the Palo Alto community, in which she was so active for more than 50 years.

Moving permanently to Palo Alto in 1968, Mimi embraced the California lifestyle, never tiring of the paradisiac climate and enjoying all the Peninsula offered. She enjoyed outdoor activities, initially bicycling and tennis, and later becoming an avid hiker of local trails, including the Baylands Nature Preserve and the Foothills. She relished formal entertaining, preparing elaborate gourmet presentations often inspired by the culture of Sunset Magazine. Mimi recorded the menus of her dinner parties to ensure that returning guests would never receive the same dishes twice.

A passion for learning about a multicultural world led her to visit three continents, where she expanded her network of lifelong friends. Closer to home, she marveled at the decades of change to Palo Alto, observing the evolution of the Leland Manor neighborhood, where she lived before retiring to the Vi at Palo Alto.

An enthusiast for language, Mimi spoke Spanish with care and vigorously defended the proper use of her native English. There was no greater reviewer of predicate nominative usage than she.

Mimi also enjoyed a variety of part-time employment, frequently in service of the greater community good. Among her jobs, she served as a substitute teacher in the Palo Alto Unified School District; an English teacher to foreign students and their spouses at Stanford University; an administrator at the Legacy Foundation supporting programs to assist children of alcoholics; and a volunteer for the long-running mid-Peninsula Rummage Sale.

Mimi was born in 1933 in Poughkeepsie, NY, in 1933, to Mary Agnes Reiling (nee Harkin) and Paul Frederick Reiling. She received a bachelor’s degree from the State University of New York in Albany in 1954. At school, she met and later married fellow student Eugene John Webb, following him to Chicago for his graduate education, and then to Palo Alto, where he served on the faculty of Stanford University for 25 years. Cementing the link to California culture, he held the Lane Family Professorship, endowed by the publishers of Sunset magazine.

Mimi was predeceased by her husband in 1995, her grandson Reilly Weaver Webb in 2017, and her younger brother Frederick Edward Reiling in 2019. She is survived by her three children, Leigh Geoffrey Webb of Santa Fe, NM, Alison Hope Webb of Boothbay, ME, and Gregory Paul Webb of Washington, DC. She is also survived by three grandchildren, Tilcara Gay Webb of Chicago, IL, Amaica Gay Webb of Boulder, Co, and Nora Catherine Webb of Davis, CA.

An advocate of children’s reading programs, Mimi would be pleased if those wishing to remember her through charity were to contribute to the Palo Alto Children’s Library