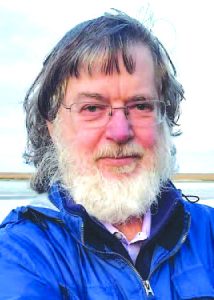 He graduated from the University of Oklahoma in 1975.
Peter graduated from Logan University College of Chiropractic in 1977. After graduation, Peter toured the US in a VW Camper van before deciding upon Redwood City, California to be the place where he would live his life.

Peter married Kendyll Stansbury on December 7th, 1981.
They have one daughter, Alethea Erin Andree. Peter enjoyed hiking and was a hike leader for the Sierra Club. He also enjoyed woodworking.

Peter would help anybody; friend or stranger. He felt like a stranger was a friend he hadn’t met yet. He always had a joke to tell or a happy thought to share. Peter had a positive spirit and enjoyed life to the fullest no matter what curves life threw at him.

Preceded in death by his father and mother, and his sister, Jeanne Andree. Survived by his ex-wife Kendyll, daughter Alethea, girlfriend Vicky Graham, brother David Andree, sister Suzanne Hodgson, one niece, and two nephews. Peter will be deeply missed by his family and his friends.