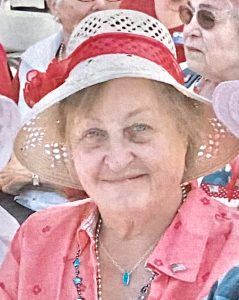 Mary Elizabeth Emard (nee Rose), a lifelong resident of Palo Alto, passed away peacefully in her sleep on Sunday, January 10th after a long illness. During her last days she was at home, surrounded by her loving family and friends. Mary was born at Stanford Hospital on October 13, 1947 and graduated from Palo Alto High School in 1966. In 1969 she met Douglas James Emard, and in 1971 they married. They have two sons, Kyle and Kevin. Mary always knew her gift was in caring for children, and in 1974 she started her lifelong career and opened ‘Auntie Mary’s Day Care’. For the rest of her life, ‘Auntie’ gave her unique love, comfort and care to many infants, toddlers, and their parents. Mary’s neighbors called her the Queen of Bryson Avenue. She lived on Bryson Avenue most of her life and over the years became the welcoming committee to the neighborhoods’ new younger residents. For half a century Mary was instrumental in keeping a ‘sense of community’ alive on Bryson Avenue. Mary was also an avid crafter and regular at the local craft fairs and bazaars. Everywhere she went Mary made friends and she loved traveling to see them, from Washington and North Carolina to England and Scotland.

The family would like to thank all her doctors, nurses, support staff, and caregivers at the Palo Alto Medical Foundation, Stanford Hospital and most recently at Mission Hospice and Home Care.

A Celebration of Life service is planned, and the date will be announced when we can celebrate together safely. In lieu of flowers, donations may be made in her memory to The Special Olympics or Ronald McDonald House Charities.