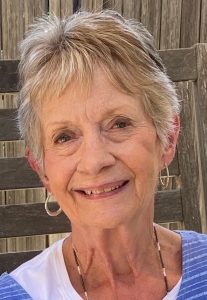 Diane Craigmile nee Kilburg, beloved wife, daughter, mother, grandmother, sister, and aunt, passed away peacefully at her home on August 15, 2020 after a short battle with cancer. She was 74.

Born on December 15, 1945 in San Mateo, CA, Diane was a resident of San Carlos for most of her life. One of six kids to Dorothy and James Kilburg, Diane attended San Carlos high school where she met her sweetheart and future husband, Tom Craigmile. In their 54 years of marriage they were only separated for 14 months while Tom served abroad during the Vietnam War. After returning from his tour of duty, Tom and Diane moved to Apple Valley, California where Tom was stationed at George Air Force base and they had their daughter Leanne.

Diane had a very successful 20-year career at Pacific Telephone. She retired from corporate life to work alongside Tom in support of his business. Diane jokingly said, “no one should have to work with their spouse”. But, they overcame the odds and it was, like everything, an incredible partnership.

Diane loved spending time with her grandchildren. She enjoyed trips to Europe, Hawaii, Las Vegas, Lake Tahoe, and Disneyland over the years. She also enjoyed going out to lunch, particularly at their favorite local spots. Diane was an avid baseball and golf fan, always cheering for the Giants and Phil Mickelson.

Diane is survived by her husband Tom, daughter Leanne Hulme, grandkids JT and Katie, her mother Dorothy Kilburg, her siblings Ron Kilburg, James Kilburg, Jackie Kilburg, and Robert Kilburg, and many nieces and nephews. She is preceded in death by her father James Kilburg and sister, Kathy Gladman.

There will be a private family service in honor of Diane. In lieu of flowers please consider a donation to the American Cancer Society in Diane’s name.