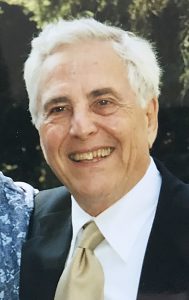 After graduating from the University of Pennsylvania Norman enlisted in the Navy and attended Officer Candidate School in Newport, Rhode Island. As a young Ensign he developed a love of the Navy that he carried forward for the rest of his life, and he developed special friendships that he treasured until his passing. He became interested in law by a chance enrollment into the Naval Justice School and maintained a professional fascination with the law for the fifty years that he practiced in the Bay Area, with offices through the years in San Francisco, Palo Alto, Los Altos and Mountain View. After graduating from Boston College Law School he was admitted to both California and Massachusetts Bars. He was recognized as a Pioneer in Santa Clara County in the specialty of Family Law. During his long career he received certificates of appreciation for his volunteer service as Superior Court Arbitrator and as Judge Pro Tempore in Santa Clara County. He took pleasure in coaching his children’s soccer and baseball teams in Los Altos Hills. After the sale of their home, where they lived for 44 years, Norman and Pat moved to the Terraces at Los Altos
three years ago.

Norman maintained an interest in outdoor sports throughout his life. He skied into his eighties and enjoyed hiking with friends and sailing, particularly on San Francisco Bay. He loved travelling both near and far, enjoying a yearly ski trip with friends to Sun Valley and relishing relaxation in the sun with family in Hawaii, and he was enriched through his travels in Europe by the culture, scenery, history, and people. His friends and family will remember his gift for joy and his
infectious laughter.

In his final years Norman worked relentlessly to reinvigorate the Benevolence Fund at the Terraces at Los Altos, 373 Pine Lane, Los Altos CA 94022, and donations in his memory could be made to that fund or to another charity of the donor’s preference.