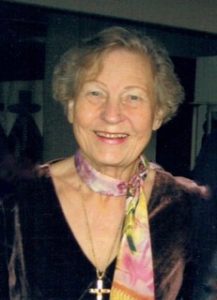 Rev. Sarah E. “Sally” Brown passed away on December 28, 2019, in Redwood City, California at the age of 96. She was a resident of Palo Alto and Redwood City for 56 years.

After raising four children, Sally went back to college to achieve her MA in Recreation Therapy. She worked for many years as a recreation therapist, incorporating dance into group activities. She also became a consultant and teacher.

In 1977, Sally joined Alcoholics Anonymous. Upon her death, she had forty-two years of active sobriety, and countless women were influenced by her example.

With her husband David, Sally co-wrote the ground-breaking A Biography of Mrs. Marty Mann: The First Lady of Alcoholics Anonymous (Hazelden; 2001). In addition, Sally and David co-authored a book for families dealing with addiction.

Always learning and reaching for new horizons, Sally entered Berkeley’s Pacific School of Religion, graduating in 1988 at the age of 64. Ordained in the United Church of Christ, she worked as a chaplain at the Palo Alto Veterans Administration (VA) Hospital. At the time, she was the first and only woman chaplain at the Palo Alto VA—and one of only two female VA chaplains in all of Northern California.

She was instrumental in facilitating one of the first VA programs for female vets suffering from post-traumatic stress disorder (PTSD).
In 1989, Sally helped organize the first national women’s conference of VA chaplains.

She later worked in the VA’s dual diagnosis unit, ministering to veterans who suffered from addictive and mental disorders.

Believing that the job of a chaplain is not “just to sit around and pray and look holy,” Sally incorporated dance and recreation therapy with patients. As a “spiritual recreation” director, she created shared, therapeutic experiences through art, music, and drama.

She continued working as a chaplain until she was 89.

Sally always had a sunny, optimistic outlook on life, which she viewed as a great adventure. She loved people, reading, and crossword puzzles. Her interests were broad and inclusive. It was not unusual to find her reading a technical scientific article in the morning and a cozy mystery novel in the afternoon.

She was always open to learning about other individuals’ cultures and backgrounds. People fascinated her, and she accepted them for who they were. Sally also loved, in no particular order, the recovery community, her church, PBS, Ngaio Marsh novels, British TV comedies, science fiction, modern dance, and music (from Brahms to Bob Marley). She generously shared her passions with others and was a joy to be around.

More than anything, though, Sally loved her family, and nothing made her happier than spending time with them.

Her husband of 72 years, David, passed away in 2016. Sally is survived by her four children: Annie, Polly, Ellen, and Philip; a grandchild, Lisa; daughter-in-law Karin; sons-in-law Chuck and Bill; numerous nieces, nephews, and cousins; and countless friends. She was beloved by all who knew her. The cause of death was a long life well-lived.