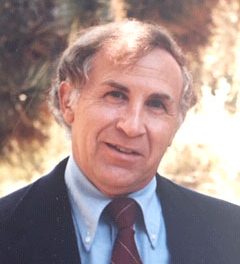 John (Vern) Cloutier, 86, passed away in his home on Wednesday, Oct 16, after a long illness. Vern was born in London, Ontario on September 16, 1933 to John Gillespie and Charlotte (Best) Cloutier. He emigrated to the US in 1960 after working for the National Research Council in Ottawa, Ontario. He spent a year north of the Arctic Circle as an electronic technician working on the Distant Early Warning radar system, which was intended to detect Russian bombers. After his experience with HP test gear, he was interested in working for HP and this he was able to do when he arrived in California in May of 1960.

He worked for Hewlett Packard from 1960 until his retirement in 1998, where he was known as John. Much of his work there included writing: being head of the Publications team, editing Instrument News and the Test and Measurement catalogue. He also worked on trade shows, advertising, and public relations.

A typical Virgo, Vern was a perfectionist, insisting on the highest standards, whether it was building bunk beds for his sons, buying a real hammer for his three-year old to practice pounding holes in balsa wood, to taking loving care of his cars. He loved WWII airplanes and had a collection of model planes that he cherished.

He used to joke about sloppy British automobile engineering: why could they never figure out how to make leak-proof seals in their engines, so car owners had to invest in sheet metal pans to keep the drips off their garage floors.

As a husband and father, Vern was supportive and nurturing, always with the goal of creating a better quality of life for his family. He played endless games of catch with his sons and never missed a baseball or soccer game. He even signed his wife up to umpire Little League games. He designed and faithfully hung up the team banners at each game. Whatever his sons expressed an interest in, he encouraged and supported them.

Though plagued by health issues and frequent hospitalizations throughout his life, he maintained an upbeat attitude.

Friends recall Vern’s generosity; one remembered a time when he was having trouble with a project and Vern dropped his own to help him out. The “to do” list at home was put on hold so he could help a neighbor rewire his boat. Another recalled how, when he was a new hire at HP, John took him under his wing, helped him to understand the HP Way and took time out each day to come and see how he was doing.

He was supportive of Mary’s many acts of help to people in need and encouraging her to have an active life outside of the home by being involved in church activities and sports, activities he was unable to do.

Vern is survived by his wife of 63 years, Mary, his sons Brad (Susann) and David (Schia), sister and brother-in-law Marlene and Alex Campbell of Ottawa, Ontario, four nieces and one nephew.