Santa Clara County’s potential purchase of the Lehigh cement plant and quarry south of Los Altos could mean conversion of the land to open space – but housing might also be part of the plan.

“If we can do two good things at the same time — create a little bit more housing in a housing shortage like the one we’re confronting today and preserve the vast, vast majority of the site for open space and recreation – that might end up being a winner all around,” said County Supervisor Joe Simitian, who is spearheading the land-buying proposal. 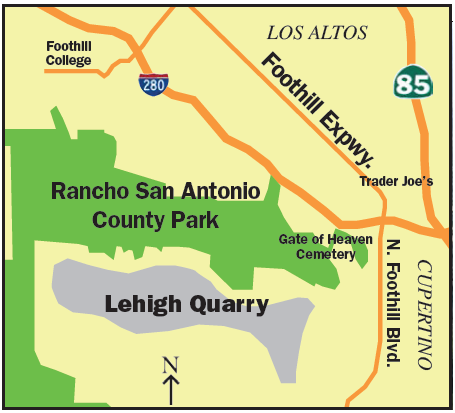 While Simitian acknowledged that some groups would want to see the entire site preserved as open space, he said using part of the land for housing could help cover the acquisition costs.

“There’s a potential for some modest additional increment of housing appropriately placed that would then generate revenue,” Simitian said during a Board of Supervisors meeting last month.

The cost to buy the property isn’t yet known, Simitian said, and a timeline for a potential purchase is still to be determined.

But more information could be available soon. The Board of Supervisors last month voted unanimously to ask county employees to research options for buying the land, including financing methods. They’re expected to report back to the board by mid-May.

Simitian said the county could buy the land if Lehigh is willing to sell it, or acquire it through eminent domain, a process in which the government takes private land for a public purpose. He said a starting point would be to talk with Lehigh representatives.

Buying the land might speed up closure of the quarry and cement plant and allow for a more “community focused” use of the site, Simitian said.

Lehigh Hanson, a subsidiary of HeidelbergCement, owns 3,510 acres in the hills west of Cupertino that include the cement plant and quarry. About three-quarters of the site is in the unincorporated county; the remainder is in Cupertino and Palo Alto.

Lehigh’s quarry produces limestone that’s used in making cement at an adjacent cement plant, as well as rocks used to build roads and in general construction. Mining began there in 1903. The cement plant began operating in 1958.

But as more homes have been built near the cement plant and quarry, residents have faced issues over the years including noise, dust and truck traffic. Many would like to see the facilities shut down.

Simitian said another reason to act now on a potential land purchase is because Lehigh wants to expand operations at the site.

In a 2012 plan filed with the county, Lehigh said it intended to wind down operations at the quarry and cement plant by 2032 and restore the land to hillside open space. But in 2019, the company applied to the county to expand its operations and extend the timeline. Simitian previously said the proposal was to “chop the top” off the ridgeline, removing more than 20 acres of hillside and allegedly violating a ridgeline preservation easement from 1972.

Lehigh has since put that plan on hold, but is expected to return with a new expansion plan.

The cost for restoring the site when Lehigh is done with the quarry and cement plant is estimated at $60 million to $100 million. One strategy the county could use to acquire the land would be to forgive the so-called reclamation costs in exchange for giving the land to the county at no cost or at a reduced cost, Simitian said.

In May, Lehigh Hanson agreed to sell its assets in the Western U.S. to Martin Marietta for $2.3 billion. But the Cupertino-area facilities weren’t included in the sale.