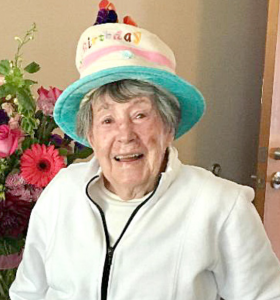 Surrounded by her children, Nancy Steele Denson, 85 passed away on September 18, 2020, at her home in Portland, Oregon. Nancy was born in Milwaukie, Oregon, the daughter of Irene and Eldon Steele. She had two sisters, Helen (Sis) Mae (Bub) and brother, Tom.

She was raised on her family’s pansy seed farm and attended elementary and high school at St. Mary’s School, Portland, Oregon. She graduated from the University of Oregon. After graduation Nancy taught fifth grade for the Redwood City School District, California, in the early 1960s. Her famous story was when a student brought in a baby rattlesnake for “Show and Tell.”

After retiring from teaching, Nancy’s primary focus was raising her growing family and supporting Dale while he built a real estate brokerage business.

Once the children were older, Nancy accepted a teaching assignment with Telesensory Systems (TSI) in the 1970s. TSI developed revolutionary technological aids for blind person that converted printed type to tactile forms. She was an early instructor for TSI, traveling both domestically and internationally developing training programs.

Although both Nancy and Dale Oregonians and attended the University of Oregon at the same time, they found each other socializing at a local hangout, the Peanut Factory. Upon meeting Nancy, Dale told her he was going to be a millionaire
and he wanted to marry her. They were engaged three months later. Nancy and Dale Denson married in 1962 on St. Patrick’s Day. They had three children, Brad, Whitney, and Jeff. They resided in Palo Alto, California, Portland, Oregon, and their ranch in Halfway, Oregon.

Nancy and Dale were a devoted couple, supporting each other though difficult times. Especially after Nancy had a serious, debilitating stroke in 2013, Dale was always working with the children to find the best care for Nancy, and secure ways to make life comfortable and fulfilling. Nancy was a true fighter and never gave up trying to regain her speech. She taught us all to never give up. They enjoyed their grandchildren and liked having them at the ranch with them.

Nancy enjoyed many hobbies in life – reading murder mysteries, playing golf, riding horses, playing bridge, and especially, spending time on her ranch in Halfway where no weed was safe! Besides her love of teaching and ranching, Nancy was an accomplished cook and an early disciple of Julia Child. Her jams an pickles were outstanding.

Nancy’s husband, Dale, preceded her in death, as did her parents, sister, Helen, and brother, Tom.