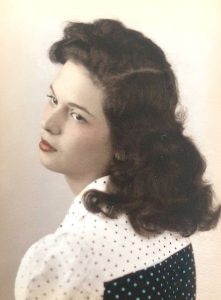 Arlene was born in Downs, Kansas on January 13th, 1925 to the parents of Albert and Nellie Rypma. She graduated from Lakeside High School and continued her education at Fort Hayes State where she received her Bachelor’s Degree in Education.

While in Kansas Arlene meet Vern Coenenberg. The two were married in 1946 and remained married for 59 years until Vern passed away in 2005.

Arlene worked as a schoolteacher in Kansas where she taught at the elementary level for several years before deciding to move to California. In California, Arlene and Vern opened multiple successful local businesses which included A&W Root Beer Drive-In, Clarke’s Charcoal Broiler, Magoo’s Pizza Parlor, and Black Angus Chuck Wagon Restaurant. When Arlene was not working at one of their entrepreneurial ventures, she took a job with Kaar Electronics before eventually taking a position with Hewlett Packard where she remained until retirement. Additionally, Vern and Arlene began investing and developing recreational properties that have been cherished and enjoyed by family and friends for many years.

Arlene was a go-getter and partook in several hobbies. As a young girl she loved to twirl the baton and participated in track. Later, she became a proud member of the Rebekahs where she performed service-oriented work. Arlene was also a remarkable and charming cook who loved to provide delicious meals that were greatly appreciated (and devoured) by her loved ones.

Arlene was an extraordinary wife, mother, and grandmother. She was strong, proud, supportive, loyal and extremely selfless; always putting everyone before herself. She inspired and encouraged her children and grandchildren to work hard and achieve their goals. She carried herself with a grace and dignity that was contagious, yet gentle and rare.

Arlene spent her final years under the loving care of her son Joe Coenenberg.

Arlene is preceded in death by her husband Vern and her brother Dwight Rypma.

A private ceremony will take place at Alta Mesa Memorial Park. In lieu of flowers, memorial donations will be warmly received at the Cure Alzheimer’s Fund in Arlene’s honor.