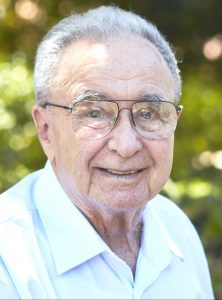 Manfred (Manny) Wildmann, a longtime resident of Menlo Park, passed away from Progressive Supranuclear Palsy on March 24, 2020, a few weeks shy of his 90th birthday.

Manny, the youngest of four children, grew up in Philippsburg, Germany, where his grandfather was the head of the town’s small Jewish community. At age 10, Manny, along with the 20 other Jews of Philippsburg, was deported by the Germans to Camp de Gurs in southern France. Six months after arriving, his family was moved to a different camp, Rivesaltes. Manny and his two sisters were able to leave the camp and they survived the remainder of the war in France. His parents and older brother were deported to Poland and murdered at Auschwitz. In 2015, he returned to Philippsburg with 18 members of his family to be honored by the city leaders. Manny was the last remaining survivor of the Jewish community of Philippsburg.

After the war, Manny attended high school in Grenoble, France, then immigrated to the United States and settled in New York City with his two sisters. Manny graduated from CCNY in Mechanical Engineering, married, and moved to Los Angeles for a job in the aerospace industry. While working there, he earned a Master’s Degree in Engineering from UCLA. In 1962, he moved to Menlo Park where he worked at Ampex Corporation and eventually became Director of Research and Chief Scientist.

Manny thought it was important to educate the younger generation about the Holocaust, and he spoke about it whenever he was asked. Currently, a video clip of him speaking about his deportation from Philippsburg plays at the Holocaust Museum in Washington.

In retirement, he continued traveling the world, seeing family and friends, speaking and writing about the Holocaust and spoiling his grandchildren.

Manny is survived by Sylvia, his wife of 66 years, his three children Nadine, Hugo (Laura), and Viviane (Dan), eight grandchildren and three great-grandchildren. He will be remembered for his intellect, his positive view on life and his love of family.

Memorial gifts may be made in his memory to Jewish Family and Children’s Services for Holocaust Survivors or Yad Eliezer which helps the needy in Israel: https://www.yadeliezer.org/.