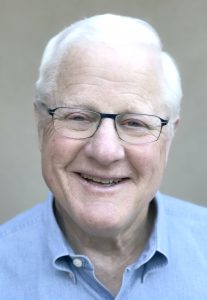 Michael Edwin Kahn passed away peacefully in his home in Los Altos on March 25, 2020, with the love and support of his family after an 18-month battle with cancer. Throughout his battle, Mike lived independently, seeking consultation from doctors and family, but remaining fully in charge of his treatment and he kept his wit, humor, and heart right up to his final days.

Mike was born on April 30, 1938 in El Paso, Texas, the eldest son of the late Joshua Nyman Kahn and Francis Levy Kahn. Mike attended El Paso High School where he was a Co-Captain of the 1956 District Champion football team and was Valedictorian of his graduating class.

Upon graduating from Rice, Mike served as an officer in the U.S. Navy, assigned to Jet Propulsion Laboratory in Pasadena, CA and member of the Ranger spacecraft program, taking the first high resolution images of the moon’s surface. Somewhere on the moon are reflector plates with Mike’s and Martha’s names etched into them. In 1964, Martha and Mike moved to Palo Alto, CA for Mike to pursue a Ph.D. in Mechanical Engineering at Stanford, which he accomplished in 1970.

For the next 30 years, Mike worked in the technology industry, including 15 years at Spectra-Physics, eventually retiring from KLA-Tencor where he served as a General Manager, President of KLA-Tencor Europe, and Vice President of Human Resources. Mike has three patents and authored numerous papers.

In addition to his work as a technology executive and business leader, Mike made the world a better place. In the 1970s and 1980s, he worked with the Creative Initiative Foundation and Beyond War. Since 2003, Mike has been on the board of TheatreWorks Silicon Valley, where he served three times as Chairperson of the Board and helped recruit and support a team that won a Tony Award for best regional Theater in 2019.

Mike loved to spend time with his family and friends. He had a regular men’s breakfast, weekly golf games, and deep connections to life-long friends. He was known for his wisdom, humor, heart, and character. Mike also loved to travel; he spent his retirement years seeing the world with Martha, with his family, and with his friends.

A service will be scheduled to celebrate Mike’s life at a time when friends and family can safely congregate again.

Memorial Gifts may be made to: TheatreWorks of Silicon Valley (https://www.theatreworks.org/).