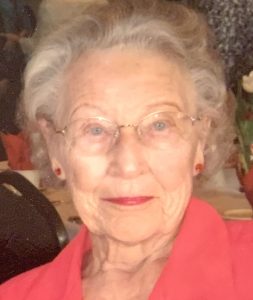 After a fulfilling life Juliann passed away peacefully at home at the age of 91. She was surrounded in life by a large circle of family and friends.

Judy, as she was known by all, was born in the very small farming town of Edgar, Montana. Growing up on the farm with her sister, Irene and 3 brothers (Lawrence, Duane and Willis), and expected to contribute to the farm’s success, helped forge her work ethic. Judy graduated in a very small class at Fromberg High School where she enjoyed playing on the basketball team.

After graduation, Judy moved to San Francisco, following her older sister, Irene. There she met her husband, James Roberts. They moved to Palo Alto to start a family. Judy devoted her life to raising her 5 children. As the children grew up, she began a new phase in her life, and stepped back into the working world, beginning her 27 year career as an executive secretary for Ford Aerospace.

Judy’s passions were dancing, baking and traveling. She loved to polka, swing dance, and square dance. Judy also loved to bake for the family. Baking pies, cinnamon rolls, and canning fruits and making jams were her specialties. Judy enjoyed her life on the farm and imparted that on both her husband and kids, on their annual summer trips back to Montana. After Jim and Judy were on their own, they enjoyed their trips with their square dance friends which included a Caribbean Cruise to Barbados and trips to Hawaii. Jim passed away after 38 special years of shared life together.

In her later years, she continued to be independent, energetic, active, and very social. In the last few years, she became a big Warriors fan.
Judy then had a loving relationship with Harold for 13 wonderful years. They traveled on many cruises throughout the world, and numerous trips to Hawaii.

She was preceded in death by her husband, Jim, Harold, daughter in-law, Laura, and grandson, Andrew.