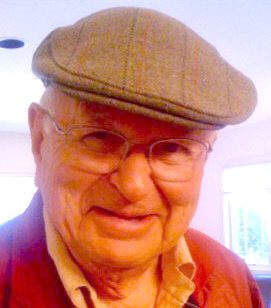 Mark A. O’Leary, who lived in and around Palo Alto for over 70 years, passed away peacefully at Stanford Hospital on November 24, 2019, following a short illness. He was 94 years young.

Mark was born in Olympia, Washington on October 28, 1925, the son of Daniel and Hope O’Leary, and the brother of Patricia. Mark grew up in Olympia, where his father Dan was the general manager of the Mud Bay Logging Company, and he spent his childhood among a very large extended family which included nineteen first cousins.

Mark attended Stanford University starting in 1943, but after completing one quarter World War II and the US Army called. After completing basic training in Missouri, Mark served for the remainder of the war in various locations in Brazil, as part of a military intelligence unit which acted as a communications hub for encrypted messages sent between Washington DC and the military forces in the Pacific and Atlantic theaters. After the war he returned to Stanford, where he graduated in 1949.

Following college, Mark gravitated toward a career as an investment banker. He spent over twenty-five years with the Harris Trust and Savings Bank, where he rose to become a vice president and head of its San Francisco office. Mark married his college sweetheart, Carol Ann Conron, in 1950 and their two children, Matt and Tim, followed in 1958 and 1960. Although the marriage did not last, Mark and Carol remained close and they raised their children together in Palo Alto, with lots of love and laughter along the way.

Mark had an extremely active retirement, which included a long stint as business manager for the Jesuit Retreat Center in Los Altos. Mark became a Life Master in Bridge and was always up for a card game with his children and four grandchildren. Mark especially enjoyed keeping up with the grandkids and their friends, and he was a fixture at youth sports events for many years. Mark continued to be a friend and mentor to a large and varied group of relatives, friends and neighbors. He will always be remembered for the twinkle in his eye, the smile on his face, and his positive outlook on life.

Mark is survived by his sons and daughters-in-law, Matthew and Victoria Jo O’Leary of St. Charles, Missouri, and Timothy and Kathlene O’Leary of Palo Alto, and by his grandchildren Brian, Shelby, Margaret and Shane.

At Mark’s request, no services are planned. Donations may be made in his memory to the Lucille Packard Children’s Hospital at Stanford.