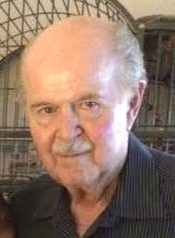 LeRoy Franklin Wicks – Born February 6, 1934. He went home to be with the Lord on November 2, 2019 at the age of 85 years. He was preceded in death by his Mother Hazel Alice (Biggs) Wicks, Father Frank Edward Wicks and Sister Betty Lou (Wicks) Uder.

LeRoy grew up in Laclede County, Missouri and graduated from Lebanon High School in 1952.

On March 20, 1953 he was united in marriage to Bonnie Faye Cox. To this union was born one daughter, Esther Marie in 1961. At the time of his death, they had been married for 66 years.

LeRoy served in the Army from November 1956 until November 1958, then active reserve until he was honorably discharged in October 1962. During this time LeRoy and Bonnie were stationed at Fort Lewis, Washington. They eventually settled in Santa Clara, California where they lived for 55 years.

LeRoy formed a love for automobiles at an early age. He worked in the automotive industry until he fully retired in 2015. For 46 years he worked at and eventually owned a full-service auto repair and gas station on the Stanford University Campus. He was well known for his honesty, integrity and hard work ethics.

When he could get away, LeRoy enjoyed camping, fishing, and hunting. He loved the beauty of the mountains, lakes and the ocean.

He fiercely loved his entire family. He was a defender, a warrior and a gentleman, who had the kindest, sweetest and most loving nature. He loved God and served Him his whole life. He was the best Dad, Grandpa, and Uncle and we will all miss him until we meet again at the gates of heaven.