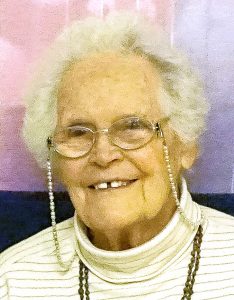 Louise Greenleaf Hall, a 50-year resident of Palo Alto, died peacefully on March 31st in Modesto, CA. She was 97.

Louise worked hard throughout life to support her family and cherished social causes. She was born on a Massachusetts farm in 1921. There she cared for her chronically ill mother and took on major household duties from the time she was five. She accomplished this without electricity or running water until age 10. She was also proud of having been able to carry five chickens in each hand.

She attended a one room K-8 school and graduated from High School at age 17. For the next 11 years she commuted to Boston, first earning a BA from Boston University then working as a secretary and technical writer for the Harvard Business School. One of the professors there recruited her to the Bay Area in the late 1940s to manage exports for a “start-up”, Magna Engineering.

In 1951 she designed, obtained funding for and oversaw the construction of a house in Menlo Park. She then married Bill Hall, a man she met in their church singles group. After a few years in Eureka, they settled in Palo Alto.

She and Bill ran two businesses on Hamilton Avenue in Palo Alto, first Hall Teacher Agency and, later, Top Copy Center. In 1969, a successful brain tumor surgery at Stanford Hospital offered her an additional 50 years of life. After retirement, Louise and Bill enjoyed dancing, travel and friends. Bill passed away in 1998.

Louise was a devoted volunteer. She was active in local scouting, was a leader at the South Palo Alto Food Closet and a teacher and organizer at the Palo Alto Unitarian Universalist church. She was proud of having helped with Earth Day, including the First International Earth Day in 1990.

For the last several decades of her life Louise was unable to drive due to poor eyesight. She still managed to get around Palo Alto by bus, bike and foot. Living alone under these conditions gradually became too much, so in 2011 she moved to the Bethel Retirement Community in Modesto CA, where she could be close to her daughter, Kathy. She was an avid communicator by email and computer messenger, which allowed her to stay in close contact with family. She maintained an intense interest in current events and politics.

Louise is survived by three children, Bennett Hall (Helen Rischbieth) of Oakland, Kathryn Hall-Boyer (William Boyer) of Modesto and Randolph Hall (Janice Partyka) of La Canada-Flintridge. There are also five grandchildren and two great-grandchildren. They are grateful to Louise for her enduring love and ask that she be remembered on Earth Day and/or by donations to a local food bank.