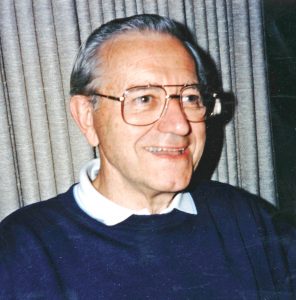 Vince Sevely was born in a ranch house in Mountain View, California in 1929 to John and Anka Sevely who had emigrated from Yugoslavia (now Croatia) in search of a better life. His parents, after saving enough money, had bought their own ranch in Mountain View where they raised apricots, plums, and cherries. Vince worked on the ranch in virtually every capacity and was driving a tractor before he was licensed to drive a car.

Although only Serbo-Croatian was spoken at home, Vince learned English quickly in grammar school, eventually skipping a grade. He attended Bellarmine College Preparatory and then Santa Clara University where he first received a political science degree, followed by a law degree. After law school, Vince served in the Army as a first lieutenant and was deployed to Korea, assigned to a tank company. He also honed his legal skills as a JAG.

After returning home, he met Helen, the love of his life, at a wedding and they married in 1957. Vince initially opened his law practice in Mountain View and eventually moved it to Palo Alto, where he continued to work until his retirement in 2015 at the age of 85. Vince had to be well versed in many areas of law when he started his practice since there were relatively few attorneys in Santa Clara Valley at that time. While he eventually specialized in probate law, Vince remained proficient in many areas of law.

Vince was active in the community throughout his life. He served as President of Los Altos Little League and was a coach for many seasons. He was an active member of the Palo Alto Elks Lodge and a member of the Knights of Columbus. Vince attended Saint Nicholas Church regularly, volunteering weekly as an usher. He served as a judge pro tem in Santa Clara County for many years, hearing traffic cases and small claims actions. Vince was a founding member of Am-Slav Men’s Club. Both sets of grandfathers were founding members of Jugo Slav Napredak Club. Napredak, incorporated in 1926, was a way for local immigrants from the south of former Yugoslavia to share and celebrate their culture. Vince carried on this tradition by serving as its president and attorney for over 50 years.

Vince passed away peacefully on March 22 at his home in Los Altos. He is survived by his wife of 61 years, Helen, and children, Cindy, Janet (Tim), John, and Gary and six grandchildren. He is predeceased by his sisters, Helen Tish and Mae Katherine Hardt Lerman.

Family and friends are invited to attend a funeral Mass on Thursday, April 4, 2019 at 10 a.m. at St. Nicholas Catholic Church, 473 Lincoln Ave., Los Altos. A reception will follow, details and directions will be provided at the Mass. There will be a private interment. In lieu of flowers, please consider donating to the Parkinson’s Institute or organizations that support Parkinson’s research.