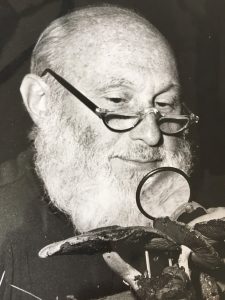 Bill Freedman had a rich life. He was an internal medicine doctor, a dedicated environmental activist and mycologist. Married to Louise Freedman for 63 years, they had a sweet and enduring bond, which included shared interests and commitment to environmental causes. He survived his wife by less than one month, Louise having passed February 22, 2019.

Bill was born on August 24th 1919 in Albany, New York to Herman and Elizabeth Freedman. He obtained a BA degree from Johns Hopkins University and then a MS in Biology from Rensselaer Polytechnic Institute in 1941.

During World War II Bill served in the Army Medical Corps as a parasitology specialist. He worked to eradicate malaria in Puerto Rico and ran laboratories in occupied Japan.

After the Army, Bill went on to receive a doctor of medicine degree in 1950 from Johns Hopkins University.

He joined Kaiser, as one of the first 50 doctors, practicing internal medicine at Kaiser South San Francisco for 33 years. Fifteen of those years he was Chief of Medicine.

As a committed environmentalist, he served as president of the Loma Prieta Chapter of the Sierra Club and spent time advocating for open space in San Mateo County. He initiated and ran numerous San Francisco Bay clean-ups for Save the Bay in the 1970s and were active members of Mills Canyon and San Bruno Mountain Watch.

He served as President of the Mycological Society of San Francisco (MSSF) and organized mushroom fairs at the Academy of Sciences and Coyote Point for many years. As Chairman of the Mycological Society’s Toxicology Committee, he was often called upon by hospitals to help identify mushrooms in suspected poisoning cases. Bill was a plant authority and gave numerous speeches about fungi to native CA native plant organizations.

Bill and Louise authored Wild About Mushrooms: The Cookbook of the Mycological Society of San Francisco. The cookbook was distributed to bookstores country-wide.

Bill was on the David Letterman Show in 1988 speaking about mushrooms.

Bill Freedman was a vital and enthusiastic man who loved life and encouraged those surrounding him to do the same. He will be sorely missed.

Please, in lieu of flowers, consider planting a tree in Bill’s name.

Memorial will be April 14, drop-in between noon to 4. Interested parties can contact us at billandlouisefreedman@gmail.com for location information.