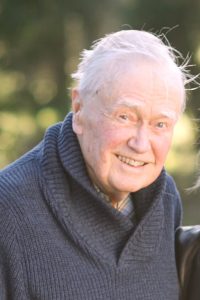 arston passed away peacefully on January 11, 2019 at his home in Palo Alto, California. He had his loving family and caregivers by his side. At the time of his death he was 96.5 years old. Roger was the son of Carrie and Olaf Skarston of Raymond Washington. He grew up in Raymond amongst numerous aunts, uncles and cousins. He shared with his family his many fond memories of his time in Raymond and his happy childhood. He graduated from Raymond High School in 1939. Roger was an avid golfer from an early age and enjoyed the sport throughout his life—even achieving a hole-in-one twice in his lifetime, both being registered with the National Hole-In-One Association. He was a Charter member of Sharon Heights Golf and Country Club in Menlo Park, California.

Roger graduated from University of Washington in 1943 with a BA degree in Economics and Business. He then went on to serve in the United States Army as a First Lieutenant spending much of his military service in Okinawa. When he left the military he went on to use his GI bill to attend Stanford University and received his MBA in 1948. At that time he joined Wilbur Ellis Company in San Francisco where he spent his entire career until his retirement in 1987.

An avid sports fan, he was a strong supporter of the University of Washington “Huskies” football team. He was also a lifelong fan of the San Francisco 49ers, the San Francisco Giants and the Golden State Warriors.

His generosity included his strong support of Sequoia Hospital Foundation, the American Cancer Society, the Audubon Society and numerous other charitable foundations. His charities were very dear to his heart.

Everyone who knew Roger always mentioned his kindness, good nature and his sense of humor. He touched the lives of many and will be greatly missed.