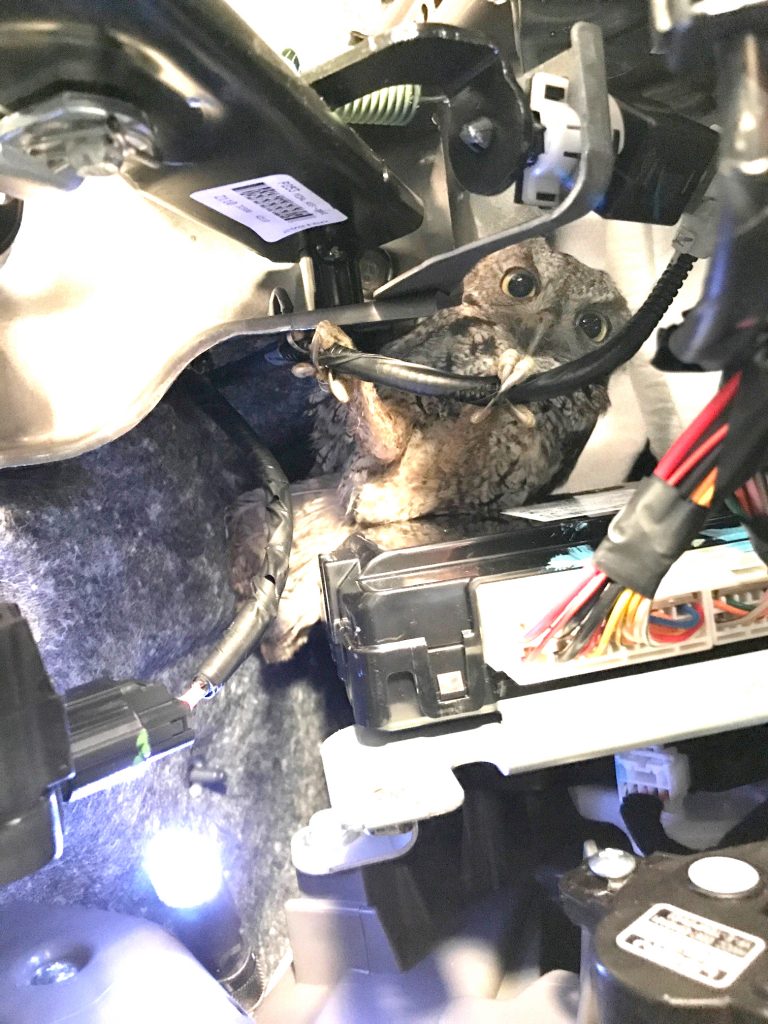 An owl got stuck in a Redwood City woman’s car but was rescued by Peninsula Humane Society workers who had to dismantle the car’s dashboard, a spokeswoman said.

The owl had flown into the woman’s car as she was driving from Emerald Hills to San Carlos on Sunday, said humane society spokeswoman Buffy Marin Tarbox. The woman had been driving with her back windows down, which is how the owl got into the car.

Upon arriving in San Carlos, she discovered the owl in her backseat and tried to get it out. Instead of exiting through a window or door, the owl went behind the gas and brake pedals and up into the area behind the dashboard, Tarbox said.

The woman called the humane society, which used a small camera to snake through the inside of the car to find the owl because there was concern the owl would not be able to get out on his own, Tarbox said.

The workers had to take apart the woman’s dashboard in order to get to the owl, and after rescuing it, put the dashboard back together for the woman, Tarbox said.

The owl has a few bruises, but other than that is alright, Tarbox said.

“He was a little more than peeved to be stuck in his situation, but health wise he doesn’t seem any worse for wear,” Tarbox said.
Once the owl is cleared to be released back into the wild, humane society workers will release him in the  area where he hitched a ride, Tarbox said.

An illustration of the objectives of the El Camino plan. BY EMILY MIBACH Daily Post Staff Writer Street parking along El Camino Real in Redwood City might be eliminated in […]

BY EMILY MIBACH Daily Post Staff Writer Redwood Roller Rink, the last such place of its kind on the Peninsula, will be closing its doors in Redwood City on Sept. […]

BY EMILY MIBACH Daily Post Staff Writer Four baby foxes, or kits, have been reunited with their mom after they were found by a Hillsborough woman in her backyard. The […]