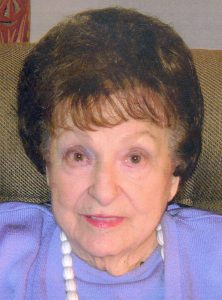 Isabella Martinez Coffman passed away peacefully at the age of 100 on March 18, 2021 under the care of her daughter at home.

Her husband, Paul Coffman, proceeded her in death in 1995 after 51 years of marriage. Married in 1944 at the Moffett Field Chapel (Paul WWII Marine), Isabella was a retired hairdresser and homemaker. She also volunteered at El Camino Hospital for over 22 years working in the Maternity Ward.

Isabella was born in 1920 and was the 7th child of 10 children born to Manuel and Maria Martinez. After relocating from Spain, they moved to Hawaii where all the children were born. Isabella and the family moved to Mountain View in 1925 where she remained.
All her siblings proceeded her in death. Brothers; Henry Martinez, Antonio Martinez, Joseph (Pepe) Martinez, and John Martinez. Sisters; Ella Merhringer, Carmen Tomasello, Mary Crippen, Ann Thompson, and Gloria Martinez.