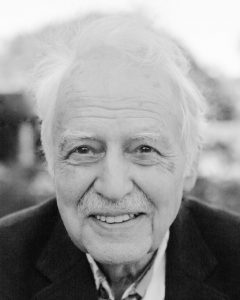 Born 1929 in Kiel, Germany, Klaus lived his childhood years in Schelswig-Holstein, on the Kieler Fjord by the Baltic Sea. During the war, he and his brother Werner bartered for food and supplies by repairing many of their neighbors’ radios, which were damaged during air raids. This initiated a life-long fascination with electronics.

After the war, he was awarded a scholarship to study at C.S.U. in Fort Collins, Colorado, where he first experienced America’s beautiful nature and wide-open possibilities. He returned to Germany and began work at NDF (Nord-Deutscher Rundfunk); The network sent him to South America to oversee a project setting up one of the first television stations in Bogota, Colombia. He was interested in emerging television-broadcast technologies (which were being publicized in the international scientific media at this time) and wrote a letter to a pioneering company named Ampex, Inc. in Redwood City, expressing his interest in their technological innovations. After a successful interview, he was given the opportunity to return to the U.S., which would become his home for the remainder of his life.

At Ampex he co-engineered magnetic tape audio and video recorders, and was dispatched to South America as Director of Engineering: co-creating broadcast stations from Caracas to Buenos Aires. He enjoyed his Latin American adventures immensely, twice renewing his 4-year contract, and continued to acquire a collection of world music (on vinyl of course) and a passable knowledge of Spanish (spoken with an endearing German accent that was somehow never overcome).

During one of his visits to the Ampex home office in California, his co-workers conspired to place his desk near a tri-lingual secretary, Gertrudis “Trudy” Laska, a recent immigrant from Argentina. It really was love at first sight! Soon after they decided to settle down in Palo Alto.

His wanderlust continued, even after their children Karen and Klaus “Klausito” were born; but Klaus Sr. was quite savvy in managing his work/family balance. He re-located his family to various international locations such as Mexico City and Munich, where he supported the technical build-up necessary for broadcasting the Olympic games in 1968 and 1972.

Klaus traveled for work throughout most of his career, also providing his marketing and engineering expertise for two other broadcast companies: CMX Systems and Snell & Wilcox. At this time, his appreciation of sustainable and renewable resources began and he installed the first commercially available solar panels in his Palo Alto home. Klaus eventually retired from Merlin Engineering in Palo Alto. This was also the start to his golden era of riding his bicycle around town, often stopping in for a Hefeweizen and a chat with local friends at one of his favorite places, Gordon Biersch.

At 70 (and about to become an “Opi”), he and Trudy decided it was time to build the family vacation home in Lake Tahoe. He poured his energy and passion into the project, seeking out the most environmentally-friendly and efficient ways to heat and power it. Like any respectable engineer, he was meticulous about every detail including obsessing over the über-efficient radiant floor heating.

He became a proud super-senior-skier season pass-holder during the Tahoe winters. In the summers he was affectionately known as “the Old Man at Chambers”, often consulting a rather large thermometer carried into the lake with him during a brisk swim and exuberantly sharing the water temperature with anyone within earshot.

Klaus was a modest person and was appreciated for his optimism, kindness, and open-mindedness. He loved meeting people and was always curious and engaging. Over the years he developed many close relationships with persons young and old. He was most happy in the presence of his friends and family, always enjoying the company of others at the many social gatherings he participated in over the years.

Klaus passed away of natural causes in the comfort of his Palo Alto home on October 27, 2020, with his beloved Trudy by his side.

He is survived by his wife of 54 years, Trudy; his daughter Karen Eichstadt-Coy, son-in-law William Coy and granddaughter Vivienne Coy of Mountain View, CA; as well as his son Klaus Jr. and daughter-in-law Dipali Murti of Santa Barbara, CA.

A Celebration of Klaus’ Life will be scheduled, Covid allowing, in the summer of 2021 in Lake Tahoe. Please contact the family at: klausfamily@yahoo.com for updated information.

In lieu of flowers, donations can be made in his memory to the International Rescue Committee. The IRC helps people whose lives and livelihoods are severely impacted by conflict and disaster: https://www.rescue.org