Sally Meadows, a Realtor and planning commissioner who got the most votes in the Los Altos City Council race, said she wants to establish herself as an independent who would bridge the council’s pro-growth and anti-growth factions.

Meadows said she believes the city needs to rethink how many of its state-required affordable housing units it can realistically build.

Meadows shares this concern with incumbent councilwoman Lynette Lee Eng, who is a member of the council’s slow-growth faction, along with councilwoman Anita Enander. 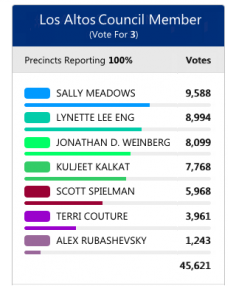 Los Altos, like all other cities, is given a quota by regional agency for how much housing it must allow in its zoning plan. The Association of Bay Area Governments, or ABAG, has said Los Altos must plan for 2,267 new homes of varying affordability between 2023 and 2031. During the previous period, from 2015 to 2023, the quota for Los Altos was 477 homes.

Lee Eng said that she’d like to see the council to work with neighboring cities to ask the state’s Department of Housing and Community Development to reconsider the quota, calling the estimated allocations “unrealistic and impossible,” especially given the lack of funding to build affordable housing.

Like Lee Eng said she thinks the city might find it difficult to meet the state’s requirements. Meadows agrees.

In the Nov. 3 election, seven candidates ran for three seats on council. Meadows came out on top with 9588 votes, ahead of Lee Eng’s 8,994 and Parks and Recreation Commissioner Jonathan Weinberg’s 8,099. The three will join councilwomen Enander and Neysa Fligor on the dais.

Meadows said she is ready to work with the entire council on issues such as accessory dwelling units, also known as granny units, which might be a way Los Altos could meet the ABAG quota.

Meadows said she wants to meet as many of the city’s affordable housing needs as possible to allow those who may already work in Los Altos to afford a home in the city. This includes teachers, who may commute from Hollister, or police and firefighters, who may live as far away as Tracy.

“These are people who are part of our community already, but they can’t live here,” Meadows said. And when the city’s teachers or medics can’t afford to live in the city, “it’s really not an inclusive community and we don’t get the full choice of people who want to work here because they have to drive so far to do it.”

Mayor Jan Pepper, who with Councilwoman Jeannie Bruins is termed out, also said she wants to see the city build more affordable housing and welcome the new residents who would benefit.

Pepper said she’s not quite sure exactly what direction the new council will take on issues relating to single-family homes and affordable housing developments.

“I don’t know how the new council is going to be looking at things, but they’re all intelligent people … I’m sure they’ll all be very thoughtful and make good decisions for our community,” Pepper said. “It’s important for us … to be a diverse community. Diversity also includes socioeconomic diversity. Having more affordable units in town will help people who can’t afford $3 million homes, (and) I think that’s a good thing.”

Dispute over closed meeting and transparency in city government

BY ALLISON LEVITSKY Daily Post Staff Writer Concerns about a lack of transparency at Los Altos City Hall are swelling among some current and former city leaders, including former Councilman […]