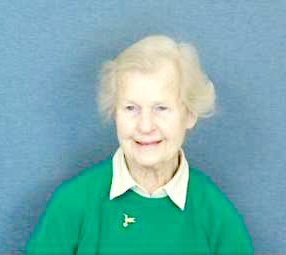 Mercedes Matthews Williams, a resident of Ladera for 47 years, passed away at age 98 on May 25 at the Sequoias in Portola Valley, where she had lived since 2002. She was known as “Mer” to her friends and extended family.
Mercedes was born in Evanston, Illinois, on July 26, 1921, the daughter of Carey and Hope Matthews. She attended Connecticut College, and graduated from the University of Michigan in 1942. That year, she and Duncan E. Williams were married, and they celebrated 68 wonderful years together until Duncan’s death in 2011. They became the parents of four sons, Jeff, David, Don, and Tom. In addition to her sons, Mercedes is survived by grandsons John, Nate, and Purusha, and many nieces and nephews.

After the second world war, Mer and Duncan lived in Madison, Wisconsin, until 1955, when they moved to California and settled in Ladera. While Duncan founded and operated the Winter Club ice skating rink in Palo Alto (now the Winter Lodge), Mer dedicated her life to lovingly caring for her four boys. She was an active member of Ladera Community Church for 40 years.

A dog lover and an avid bird watcher, Mer was an enthusiastic supporter of the National Audubon Society, the Nature Conservancy, and numerous other environmental protection groups and organizations dedicated to making the world a better place. At both the family home in Ladera and the small yard behind her Sequoias apartment, birds were always present.

Mercedes was a gentle, caring person who will be missed by all who knew her. An informal gathering of remembrance is being considered for the fall, after it is regarded as safe for groups to assemble. Mer would be honored by contributions in her memory to one of the organizations noted above.