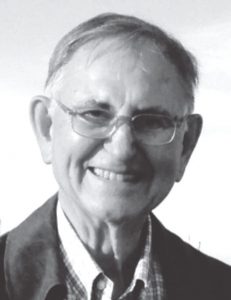 After attending the Wahpeton State School of Science, he joined the Air Force in 1946 and became a radio operator on the B-17 Flying Fortress. Following his service he graduated from Spartan School of Aeronautics, worked as an aircraft mechanic for Frontier Airlines, began as a flight engineer for United Airlines in 1951.

He married Liane Crawford in 1954 and had a 44 year career as a pilot, attaining the rank of Captain, for United Airlines, flying the Convair, DC-6, DC-7, DC-8, DC-10, Boeing 727 and Boeing 747. His hobbies included light airplanes, camping, fishing, river rafting, boating, skiing, SCUBA diving, traveling, handyman (handled all the home repairs), gardening: known for his most amazing tomatoes. Preceding him in passing in 2012 was his wife, Liane. Hal is survived by three sons, Leonard, Jim and Scott, and two grandchildren, Justin and Colby; brothers Albert and Charles, sisters Aurelia and Helen.