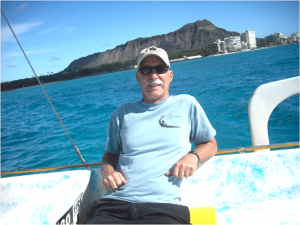 Richard Reeder passed away peacefully at home on January 29, 2019 after a brief battle with cancer. Richard graduated from Palo Alto High School and the University of Oregon.

After college, he joined the Navy, where he flew maritime patrol in P-3 Orion aircraft. Richard served 4 years fulltime Navy during the Vietnam War and weekends another 21 years, retiring as a Navy Captain. Richard’s career was as in insurance with Farmers in Santa Rosa and Pleasanton, Ca.

Richard grew up belonging to Palo Alto county club. He was an active member and Club President of the Roseville Woodcreek Golf Club until his health required him to step down.

Rich was preceded in death by his parents, Marian and Paul Reeder. He is survived by his wife Connie, son Eric (Elizabeth), daughter Megan (Jed), stepson Bill (Ari), sisters Marianne and Polly, grandchildren Sierra, Kyvon and Cole, and many nieces and nephews.

Per his wishes, Rich’s remains will be interred at sea in the warm waters off Poipu Beach in Kauai on March 30, 2019.