That’s all it would have taken to stop the 12-cent per gallon gas tax increase and a $25 to $175 increase in the car registration tax.

If only one member of the Assembly or Senate who voted for these increases had changed their vote, it would have failed.

They voted along party lines for the increase. 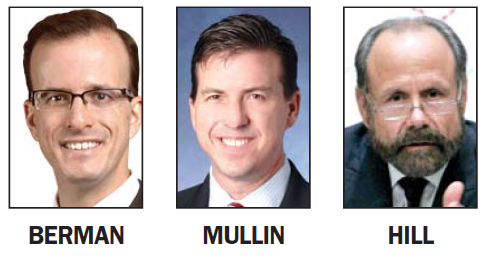 One Democrat who broke ranks was state Sen. Steve Glazer, D-Orinda, who wanted a provision added to the bill that would prohibit BART workers from striking. But the labor bosses in Sacramento, who pull the strings in the Legislature, wouldn’t allow it. So he voted no.

Then Gov. Jerry Brown, the architect of these increases, convinced a little-known Central Valley Republican, Sen. Anthony Cannella of Ceres, to vote for the taxes. In exchange, Cannella got a $400 million extension of the ACE train into his district and a $100 million, four-lane highway to the UC-Merced campus. The rumor in Sacramento is that the Altamont-Corridor Express train will be renamed the Anthony Cannella Express.

Imagine what Hill, Berman and Mullin could have gotten if they had bargained with Brown? Maybe a couple of billion to underground the Caltrain/high speed rail tracks on the Peninsula? That would have solved a lot of problems.

While streets and highways need repairs, the tax plan passed by the Legislature on Thursday has several flaws.

• First, the governor is wrong when he claims the state doesn’t have enough money to maintain and repair its roads. California, which has the world’s sixth largest economy, has a general fund of $171 billion, but only $10.6 billion of that goes to transportation. And state revenues have been growing by about $7 billion a year — more than the $5.2 billion this tax would bring in. Instead of raising gas and car taxes, how about we freeze state spending in non-transportation areas, and use the increased revenue on our roads?

Want another source of money? Kill high-speed rail and spend some of the $64 billion allocated for that project on our roads. HSR is doomed for a lot of reasons, such as ridiculous overestimates in ridership, underestimates in construction costs and no foreseeable funding from the federal government.

For only one quarter of what Brown wants to spend on high-speed rail, $15.4 billion, we could widen and resurface every major interstate in the state, according to Ed Ring of the California Policy Center.

• Second, Sacramento politicians have a 15-year history of siphoning off gas and vehicle registration taxes for non-transportation purposes. Brown claims this bill will have tougher restrictions against such diversions, but the bill states that the money can go for salaries and benefits at BART and Caltrans.

In other words, it’s a payoff to the public employee unions with little tangible benefit for the public. If history is any indicator, the taxes approved Thursday will eventually be diverted to non-transportation purposes too.

• Third, before throwing any more money at Caltrans, the Legislature should clean up the waste and mismanagement found at that agency. The nonpartisan Legislative Analyst’s Office, in a May 2014 report, said Caltrans is overstaffed by 3,500 employees at a cost of more than $500 million a year.

State Auditor Elaine Howle, who reached a similar conclusion in an August 2015 report, discovered a Caltrans engineer played golf on 55 workdays in a 19-month period while his time card listed him as working. Howle said that no one could account for how much work the engineer had done, if any, because there was a miscommunication about who was supposed to supervise him. Sadly, the bill that passed Thursday has no meaningful cost controls to stop such waste.

• Fourth, this bill represents the largest gas increase in California history, and it comes at a time when small businesses and families are struggling to make ends meet. Low- and middle-income families spend more of their money on gas than upper income families. What we have here is a regressive tax passed by progressive politicians. Small business owners are already struggling with soaring health care costs, higher minimum wages, rising workers’ compensation premiums and now a gas tax increase.

The bill raising these taxes was rushed through the Legislature without much public comment. But a statewide poll commissioned by KABC-TV in Los Angeles found that 44% of voters opposed the tax while only 37% supported it. The poll found that 61% of voters wanted Caltrans to make better use of the money it already gets, while only 27% said the agency needed more revenue.

This tax didn’t go to the voters, however. Democrats have supermajorities in the Assembly and Senate, giving them the two-thirds they need to pass a tax hike.

The tax increase, which raises the gas tax from 18 cents a gallon to 30, goes into effect in November. The taxes would increase annually with inflation, and the inflation adjustments would apply to the full 30 cents.

This is a permanent increase with no opportunities for review by the Legislature or voters.

And it all could have been stopped with just one vote from one of our local representatives — Berman, Mullin or Hill. Remember this tax increase the next time you see one of those names on a ballot.

DAILY POST EDITORIAL In the past, this newspaper hasn’t supported school bond measures for two reasons. • The interest payments and fees usually exceed the amount spent on school construction. […]

By the Daily Post staff Many students on the mid-Peninsula may soon be able to wake up later if Gov. Jerry Brown signs a bill that bars middle and high […]