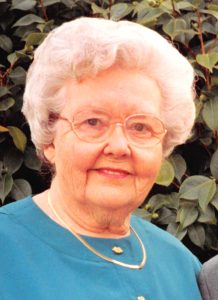 Saisie Pratt, a long time resident of Palo Alto, CA passed away on December 31, 2108 at the age of 99. A memorial service will be held at Ladera Community Church on January 26, 2019 at 2 pm.
Saisie was born on August 17, 1919 in Hadley, MA to Ernest and Hazel Hibbard. She was a graduate of Northfield Academy, and received a BA from Mount Holyoke College in 1941.

Saisie received a scholarship from the Congregational Mission board to attend Yale University and graduated with a Masters in Nursing. A condition of her scholarship was to complete mission work and she accepted a position in Gaziantep, Turkey. She spent the next 5 years educating nursing students at the American Hospital in Gaziantep.

Saisie met Melyvn Pratt in 1941 as they were beginning their graduate work at Yale University and they were married in 1949. They had four children and adopted one war orphan. After moving to Palo Alto, CA with her husband, Saisie began working at Stanford Hospital, where she also taught nursing.

Saisie was preceded in death by her husband Melvyn Pratt and her daughters, Rebecca and Mary; and survived by her sons Ronald, Crawford, and Alden and their wives Jackie, Deborah, and Hanady respectively, two granddaughters and three great-grandchildren.